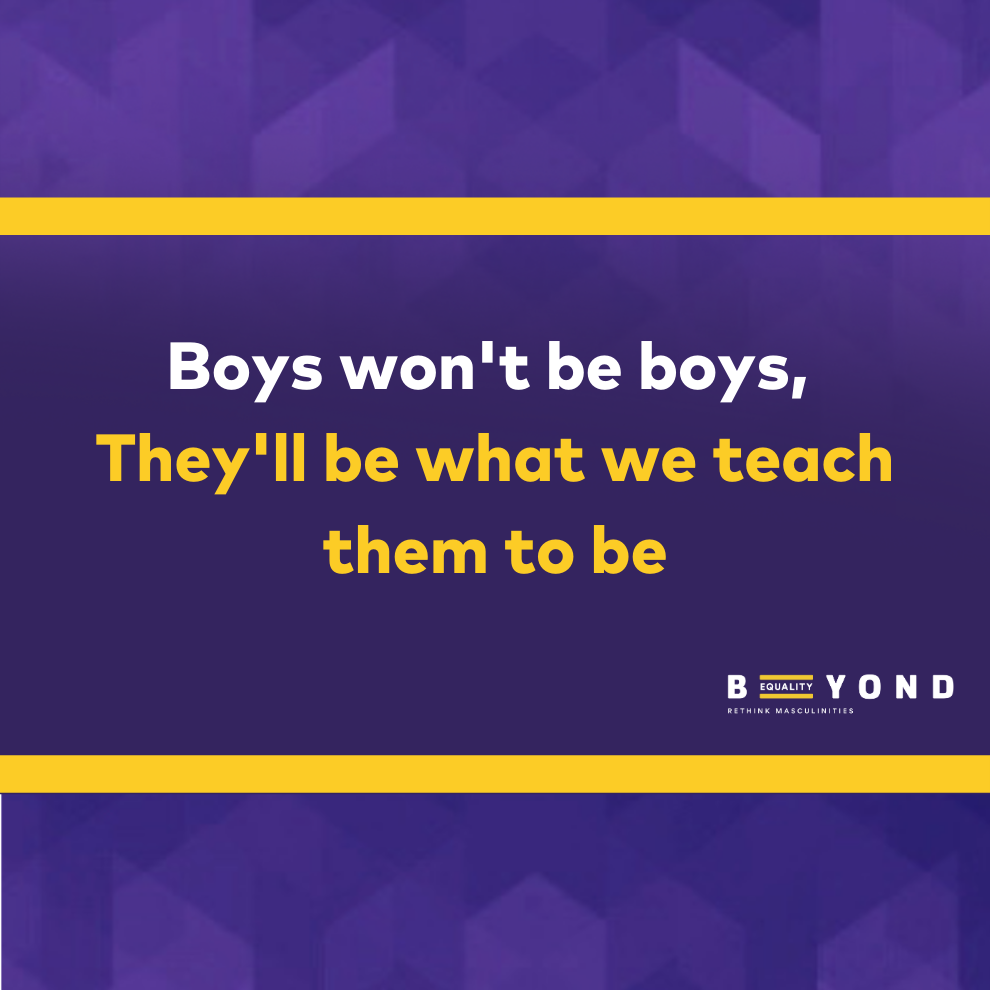 Boys won't be boys, they’ll be what we teach them to be

Beyond Equality is a charity that works with men and boys of all ages towards gender equality, inclusive communities and healthier relationships. Over the past 8 years, we have facilitated training that engages those who don’t normally take part in conversations about gender equality, masculinity, power and privilege and we challenge and support them through a process of change. We know that the threat that women, girls and marginalised genders experience will only be eliminated when men realise that this is a problem for which they must take a large part of the responsibility for addressing.

We know that violence isn't inevitable. Boys won’t be boys. They will be what we teach them to be.

We would like to express our deepest condolences to the family and friends of Sarah Everard.

The outrage over Sarah Everard’s murder is necessary, as her death is rightly seen in context of the structures of violence against women in the UK. Her image now has become the face of the urgent need to acknowledge and prevent men’s violence against women. This call to action among boys and men must remain a priority, as it will require long term and society wide action to change: including education in schools and communities, funding for support services, as well as substantial government initiatives to support women and marginalised genders.

As experts in behavioural change, we know that meaningful progress takes time. We want to ensure that this is a movement, not just a moment. We are mindful that this risks to be another ‘phase’ that will lose traction, interest and support. Last summer, social media, media stations, organisations and individuals poured out in the millions for BlackLivesMatter. Mistakes were made, and the ‘enthusiasm’ visible on social media often disappeared before tangible material impacts could be achieved, causing hurt and frustration for many folks in Black communities. We are working so that the public calls for action lead to change.

There is still so much silence over the deaths and violence faced by marginalised communities, and it will be some time until we’re talking about all ‘women’. Bibbaa Henry and Nicole Smallman were murdered last year in London park and police officers took pictures of themselves with their bodies. Blessing Olusegun was killed on a Sussex beach last year and her death remains unexplained and the police have said that there is nothing to investigate. We have witnessed the loss in momentum to protect Black lives, we have heard the silence from individuals, organisations and the media over the dramatic increase in violence and racism towards the Asian community and the lives, rights and safety of the trans community remain a second thought for most. We as an organisation work towards a world free from violence that would have kept Bibaa, Nicole, Blessing, Sarah and all women, whose names we do not hear, safe and valued.

We know that education and a concerted social effort can play a large part in addressing this issue collectively to prevent violence and eliminate the structures that encourage or condone it. This, and on supporting survivors, is where the investment of funds and energy should be placed.

Our contribution to this movement is education. We know how to hold spaces for people to learn, to reflect and to enable them to make changes. These opportunities for deep reflection are rare in many of the spaces we as individuals are in day to day. They aren’t always happening with friends, with our families and at our workplaces and so what we offer is a unique space for men and boys to do that. As an organisation we remain reflexive, self critical, honest of the shortcomings and continually strive to do better.

Over the past several days, we have been inundated with media requests. We’ve been featured on the BBC, Channel 4, spoken on Radio 5 Live, Times Radio, LBC and given interviews for print media articles. Our social media following has doubled and we’ve received messages of support, despair and hope from so many of you. We’ve had over 150 men sign up to our upcoming Community Allyship training that only had 14 places available.

We have seen up close the issues that men and boys face. We recognise the stress and pressure they experience living under a system that has such a narrow, negative idea of what it means ‘to be a man’ and we have heard them speak out and support each other to do better. These are not easy conversations, nor easy changes to make. But they are essential.

However, though men have a huge role to play in this conversation, they should not be at the centre of this conversation. We know that many men are uncomfortable right now, and want to know what they can do. But in our discomfort, we must not derail the focus away from men’s accountability and behavioural change. To this end, we address some key points that have been raised in the media and social media discussions:

87% of violent crimes are committed by men, 97% of women have been harassed in the street, yet the claim that 100% of the men we know and have around us would never ‘do such a thing’ means that these numbers do not add up. The stigma, fear and defensiveness attached to this work is very real. In a society that doesn’t hold men accountable, that doesn’t teach men to be and strive for better means that a lot of the negative and “bad” behaviour that needs to be addressed has been normalised. The normalisation of aggression, inequality, coercion and control from men means that it is very difficult for men and boys to talk about their role. The dichotomy of “good” and “bad” men is what prevents so many men from being able or willing to reflect on their own behaviour. Therefore, next to holding others to account for what they have done there has to be self interrogation from all men. We must move away from the fixed idea that there are only “good” or “bad” men. That there is an “us” and “them”’. Instead, the mindset needs to lean towards the fluidity of the good and bad behaviors in all of us - many of which we are all capable of - it is instead not just individuals but those behaviours that work to uphold systemic violence that must be challenged.

The notion that men suffer from mental health problems much more than we are aware of or more than is made visible to us and thus men should not be held accountable in the way that they are right now is a dangerous one. Fundamentally, the fact is that many of the mental wellbeing issues that men face are also a result of the violence and oppression that is being normalised in society, and the fact that we’re rarely socialising men and boys in ways which give them toolkits for relationship building and wellbeing. We work towards mental wellbeing and the prevention of violence at the same time. In fact, the work is the same, a world where women, girls and marginalised genders feel safe and is one that also addresses and resolves many of the mental health issues faced by men. It is a great disservice to the reality facing men many struggling with their mental health issues only to raise this when the issue of violence against women, girls and marginalised genders is brought to the table.

We want to play our part in addressing this urgent public issue and we want to make sure that men have the guidance so that they can effectively contribute to ending men's violence against women. Together we can ensure that this  moment can be sustained, and lead to long term change.  We are focusing on three priority areas:

1. Training male allies using an adaptation of our volunteer training program. We're offering a full-day training deep dive into masculinity, and the part they play in a system that perpetuates oppression & results in VAWG.

We have been training men, giving them spaces to do deep explorative work on their values, masculinity, gender justice, structures of oppression, and equipping them with a framework of allyship that they can apply to their own lives and in their own circles. Now it's time to reach more men.

2. Working with young men and boys through our schools project 2.0. Education needs to begin with young men and boys, opening up space where they can gain confidence in who they are outside of peer-pressure and patriarchal masculinity, while learning about the important roles they can play in creating a safer society. We've been doing this work for 8 years, and are partnering with a leading international research/program design organisation to develop additional programmes and to embed changes in the school after the workshops.

3. Prepare universities for the return to campuses. After 18 months without in person socialising, we want to make sure that universities, staff and students are prepared for return to campus life. We will to train over 250 student leaders, who can then work with their teams to reach up to 100,000 students, as well as holding our Team Talk workshops with 200 sports clubs, covering issues of sex, healthy relations, mental wellbeing, team culture, inclusion, bullying and tackling discrimination.

There are many ways you can contribute in your own lives and circles, or by donating to organisations that support the survivors of this violence and those working to prevent it.

If you would like to take part in our efforts you can:

Sign up as a community ally or volunteer - bit.ly/VolunteeringBE

Donate to our community fundraiser